Pathway Towards Low-Carbon Transport in Vietnam

Scenario Study serves as Input for the Next NDC

Rapid growth in transport activities since the late 1990s is endangering the achievement of climate targets in Viet Nam. The transport sector accounted for 18 percent of total CO2 emissions in 2014. Under the business-as-usual (BAU) scenario, it is estimated that until 2030 carbon emissions from transport would rise sharply to nearly 90 Mt CO2e. GIZ and World Bank in collaboration with the Ministry of Transport (MOT) launched on Monday Sep 16th the “Pathway to Low Carbon Transport” report (download press release). This analytical work comes at a critical time when the Government of Viet Nam is updating its Nationally Determined Contribution (NDC) on reducing carbon emissions and set out its next medium-term public investment plan for the period of 2021 to 2025.

“We highly appreciate the close cooperation between GIZ and the World Bank, and look forward to the continual cooperation as well as technical, technological and financial support for actively joining hands with the international community to protect the earth’s climate system”. said the Vice Minister for Transport Mr Nguyen Nhat.

The report analyses scenarios of GHG mitigation potential. While a first scenario describes impacts of mitigation policies and measures that are foreseen in Viet Nam’s National Transport Master Plan (using domestic resources) a second scenario includes additional measures with support from international resources. The third scenario pushes the level of ambition and is assuming significant support from international resources and active participation of the private sector and e.g. assumes achieving 30 percent of electric two-wheelers in motorbike fleet by 2030. 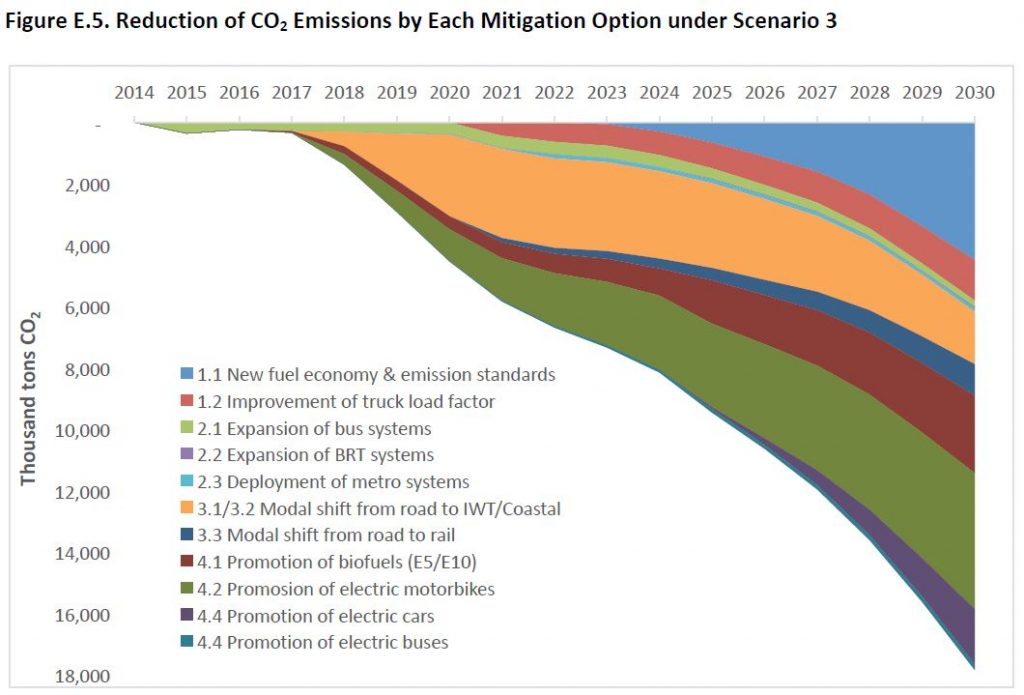 Scenario 3 includes mitigation actions that go beyond the current ambition and would require additional efforts of international support and involving the private sector.

Through collaborating with World Bank, the analysis goes beyond analysing GHG mitigation potentials and includes marginal abatement costs of mitigation actions. The most cost-effective measures include shifting transport from roads to inland waterways and coastal short-sea shipping, deployment of stricter vehicle fuel economy standards and promotion of electric mobility. In addition, improving logistics and optimising the load of trucks can reduce emissions significantly and at negative costs. Further efficient, cost-effective and economically feasible mitigation measures are analysed in three scenarios. However, while these measures are economically feasible and would bring significant long-term benefits through a reduction in transport costs, they would require considerable investments.

The Vice Minister of Transport Mr. Nguyen Nhat co-chaired the Event together with Mr. Ousmane Dione (World Bank Country Director for Vietnam), Mr. Jörg Rüger (First Secretary for the Environment at the German Embassy in Hanoi) and Mr Justin Baguley (Counsellor for Economic and Development Cooperation of the Australian Embassy).

The event and the report are a major milestone marking three years of cooperation between the Ministry of Transport’s Department for the Environment and the Advancing Transport Climate Strategies (TraCS) project funded through the International Climate Initiative of the German Federal Ministry for the Environment, Nature Conservation and Nuclear Safety (BMU). The project focused on providing support for the systematic assessment and reduction of greenhouse gas (GHG) emissions in the transport sector of Viet Nam.